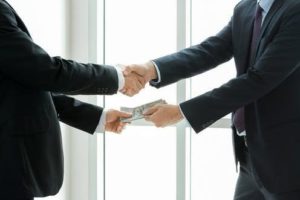 Bribery is the offer or acceptance of anything of value in exchange for influence on a government/public official or employee. Generally, bribes are intended to influence or alter the actions of a certain individual. Bribery can take place as both political and public corruption. Bribes can take place in many forms, these forms including gifts, payments of money, properties, privileges, services, and favors.

No written agreement is necessary in order to prove the crime of bribery, at the most fundamental level, charges of bribery need only to prove that there was an agreement for the exchange of something of value for a sum of money or something else of value. For example, police body camera footage of a driver handing an officer cash before driving away without being cited would suffice as evidence of an agreement made. It is important to note that a bribe does not need to be deemed harmful to the public interest to be considered illegal.

What are Some Examples of Bribery?

Bribery can come in many forms, for example, a gambler may offer to pay a referee to call fouls in favor of a certain team to influence the game and benefit the gambler’s chosen team. Bribery can also consist of an organization, such as the NRA, offering money to public officials in order to influence the direction of a legislative proposal in said organizations favor.

One defense available for the crime of bribery, in certain cases, is entrapment; entrapment is a scheme by which one person is trapped by other persons to commit a crime, in this case, the acceptance or the offer of a bribe. Another possible defense can be the accused can claim is that all the elements constituting the offense of bribery have not been sufficiently proved.

(a)  Offenses defined.–A person is guilty of bribery, a felony of the third degree, if he offers, confers or agrees to confer upon another, or solicits, accepts or agrees to accept from another:

(1)  any pecuniary benefit as consideration for the decision, opinion, recommendation, vote or other exercise of discretion as a public servant, party official or voter by the recipient;

(2)  any benefit as consideration for the decision, vote, recommendation or other exercise of official discretion by the recipient in a judicial, administrative or legislative proceeding; or

(3)  any benefit as consideration for a violation of a known legal duty as public servant or party official.

(b)  Defenses prohibited.–It is no defense to prosecution under this section that a person whom the actor sought to influence was not qualified to act in the desired way whether because he had not yet assumed office, had left office, or lacked jurisdiction, or for any other reason.

If you are charged with Bribery, it is imperative to seek experienced legal counsel immediately! The Law Office of Vincent J. Caputo is here to assist you in all of your legal needs. Your Future? Our Priority!